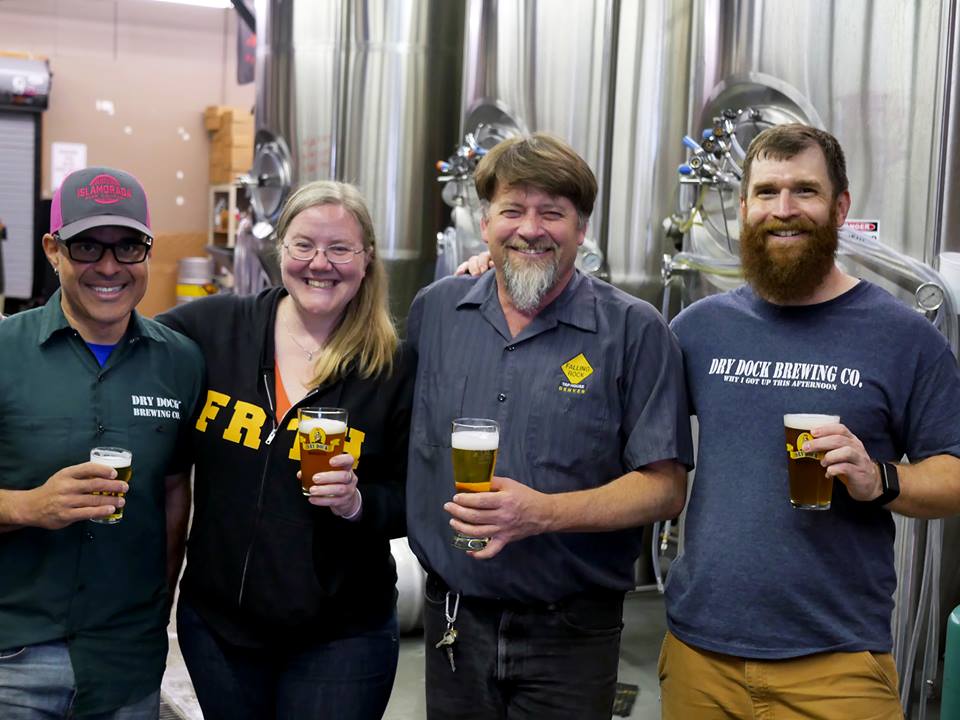 A Tapping 10 years in the making. In 2007 we celebrated our 10th Anniversary with a 10 day long tapping extravaganza. A different beer was to be tapped each night. I had contacted 10 Colorado Brewers to each make a special beer for the occasion. One beer was to be a re-creation of one of Falling Rock’s favorite beers from the first couple of years, Mr. Hoppy from Wolftongue Brewing up in Nederland. About a month out, I got the last piece of information (the hops used in the beer) from a former brewer at Wolftongue and passed it along to the brewer making the re-creation. All was set, or so I thought. On the opening night of our celebration, Mr. Hoppy was to be tapped; people were excited, the front page of the weekend section of both the Denver Post & the Rocky Mountain News heralded the return of the cherished elixir. All we needed was the beer. At 1pm I called the brewer that agreed to make the beer for us, inquiring on the delivery schedule (we were supposed to tap the beer at 5pm). He told me that I wasn’t going to be happy, he had not even brewed the beer. (And people wonder why I insist on being a part of the brew! I don’t just enjoy raking out spent grain…) A string of naughty words escaped my lips. Repeatedly. I consulted with my friend Beth Walter (now my assistant) who was working at a chocolate shop & tasked with wrapping chocolate bars that were paired with the beer we were tapping each night. She suggested substituting Dry Dock’s IPA since they at least had similar flavor profiles & would pair well with the chocolate bar for the evening. She then called up Kevin Delange at Dry Dock & explained. At this time Dry Dock was an appendage to the Brew Hut Homebrew shop, a small brewery on the back side of a strip center in south Aurora. Kevin was beyond thrilled and drove across town through rush hour traffic arriving at Falling Rock just a couple minutes after 5pm. When he walked in, I had just finished telling the gathered masses of the offending brewery’s misdeeds (punctuated by cutting a tap handle & sign in half with my trusty little cordless circular saw) and announced Kevin’s arrival with the kegs of beer. To say that it was a hero’s welcome would be an understatement. Fast Forward 10 years – Dry Dock has to be pouring beer on the first night. I sat down with Dry Dock’s Head Brewer, Alan Simons and we decided to come up with a more modern interpretation of Mr. Hoppy, we would start from scratch. We came up with a wonderful golden IPA, shooting for about 6.5% abv with tons of late addition hops & a more than little bit of Simcoe Cryo Hop Powder. Super Hoppy, befitting of its name, but not super bitter.

Our 2nd beer for opening night of our 20th Anniversary is from Green Flash/Cellar 3/Alpine. Once upon a time a distributor, not particularly known for their beer, brought a sample of a super hoppy IPA from the San Diego area called Green Flash West Coast IPA. We here at Falling Rock fell in love, especially one of our original bartenders, Jason Quinn. No matter what kind of beer you wanted, JQ pretty much recommended West Coast IPA. When original distributor didn’t work out (cough), I introduced them to my favorite distributor, Elite Brands (winner of the 2017 Craft Beer Distributor of the Year). Green Flash’s fiercely independent owner, Mike Hinkley believes we have the longest running West Coast IPA Handle outside of San Diego County. Back about 1999 or 2000 I was introduced to an owner of a tiny new brewery outside of San Diego, located in a tiny town by the name of Alpine. Pat McIlhenney was attending his first GABF and vowed, somehow, to get me a keg of his delicious IPA called Pure Hoppiness. A few months later some beer pixies magically left a keg of it in my cooler one night while I wasn’t looking. A few years later Mike purchased Alpine and now makes Alpine beers at the Green Flash brewery for a wider audience. But Alpine also still brews at their original location so we decided to make something really big & whiskey-barrel aged there. Enter Pat Korn of Green Flash’s Cellar 3 project. Cellar 3 is the barrel aged division, funky, sour, or whiskey, if it ages in a barrel, it’s Pat’s realm. Alpine’s head brewer (& Pat’s son) Shaun McIlhenney decided we should tweak a previous Strong Belgian Ale recipe (dark, rich & did we mention strong) by putting 75 lbs of a raisin medley in the hop back and passing the 10 barrels of hot wort through it. All that was left was some of the skins in the hop back. OK, so some of the skins made it through the hop back & lodged in the heat exchanger but, hey, luckily an intern was coming in the next day for a “teachable moment” and real-life “on the job experience.” after fermentation, the beer was put into a few Whiskey Barrels from Colorado where it sat for 10 months. Get Ready, this one might leave a mark a flexpetz.

There’s more to come, and if you missed it our list of breweries can be found at https://fallingrocktaphouse.com/20th-anniversary-celebration/ ‎