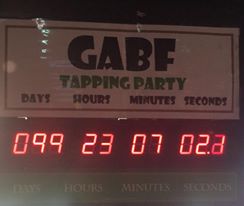 (For More Details Check Out Each Event On Our Calendar https://fallingrocktaphouse.com/calendar/)

The Annual Tapping Party!! The unofficial Kick Off to GABF Week!

– 2 Special Releases of Collaboration Beers brewed just for this week! Thank you Spangalang and Upslope for your hospitality!

– 22 Rotating Taps of beers both new and vintage, some sent in just for the tapping party!

4pm-5:30pm – IPAs and Global Beers – A book signing by Stephen Beaumont & Tim Webb, authors of the new, fully revised and expanded second edition of The World Atlas of Beer, and Joshua Bernstein, author of Complete IPA. The signing will be accompanied by the tapping of east and west coast American IPAs and select international beers, beer details to follow. (Parking Lot Bar)

And Say Goodnight Gracie!! See you Next Year!